Click here for a larger image of this photo.

Note reference to Barrett's Creek in lower left corner. "Lot No. 4" in center of map is location of present city of Grayson,
with Little Sandy River just to the east. Lots no. 1, 2 and 3 are in the Bourbon Hollow and Schoolhouse Hollow area.

Stinson Creek is drawn in the lower right portion of this map section. Upper right is Wilson's Creek area.

The intersection of present day Main St. and Carol Malone is in the area marked "Grayson & Carter Lot #3".

There appears to be road/trail marked from the Little Sandy north of present downtown Grayson
(near the top middle of the map) from the "S. Stratton" property the ense southwesterly across several small
parcels chained along its route to the lower left hand corner of the map image. One would naturally expect a
marked Midland Trail in this general area, but on a westerly, rather than southwesterly path as indicated here.

Note the chain of properties running due west near the present route of the AA Highway north of Grayson proper.
One would suspect that they all fronted on a road or a major creek. There is a discontinuous rough line drawn
as a boundary along several of the more westerly parcels. Very mysterious.

Below is a current day aerial photo of the area depicted on the early maps.

Some of the differences between the depicted routing of the Little Sandy River may be ascribed to unavoidable
inaccuracy arising out of the relatively crude surveying equipment used, but much of it no doubt reflects the
fact that the route of the Little Sandy has been adjusted to accommodate the needs of the adjoining property owners.

Interstate 64 passes throught the center of the loop in the Little Sandy River owned by R. H. Grayson in 1811 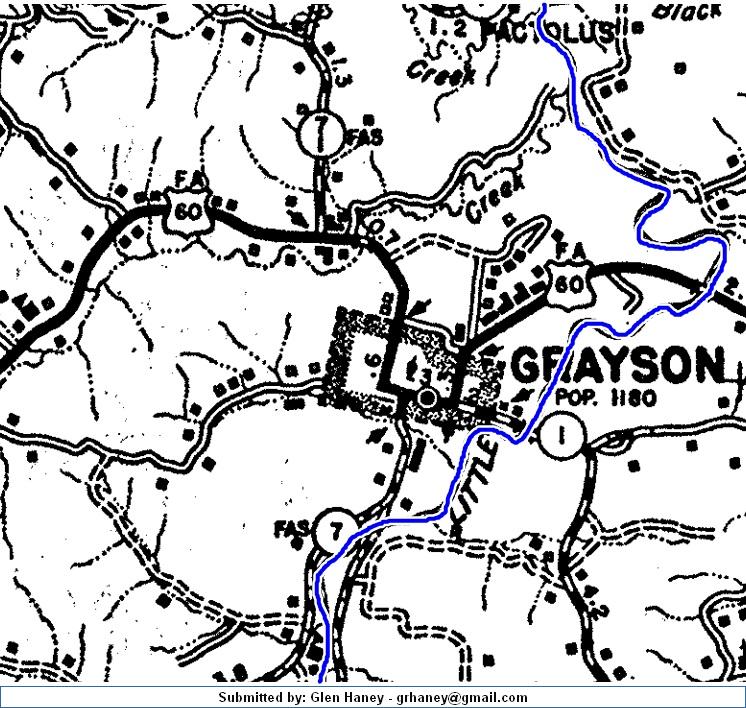 "In this 1937 map, I believe that the road leading southeast out of Grayson predated the old route 60 out of town.
It would seem to coincide with the 1811 map." - Glen Haney

We seldom think about it, but Grayson is actually very much a product of the Little Sandy River. The broad plain on which
Grayson is sited is the flood plain of the Little Sandy. There are few similarly substantial expanses of flat ground in eastern Kentuck.
Coupled with the fertility of the soil, access to fresh water and its position at the intersection of two early trade routes:
south from the Scioto Valley of Ohio to southern Kentucky, Tennessee and beyond; and west from the Big Sandy to Mt. Sterling.
In contrast to Olive Hill, Sandy Hook or Morehead, it is a natural locus for a substantial settlement.

There is much archeological evidence that the Grayson area was the home of Native American peoples in pre-contact times.
The Little Sandy River was an important element in the Great Lakes - Cumberland Gap trade network of that era.