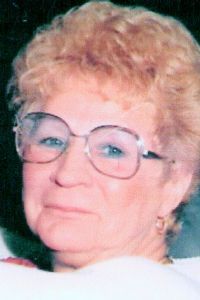 Margie was born July 1, 1941, in Halderman, Ky., the daughter of Frank and Maudie Jennings Nickels and moved to Niles as a child in 1943.
She was employed by the General Motors Corp., working on the assembly line for 27 years, retiring July 1, 2006. She enjoyed cooking,
knitting, crocheting, crafts and gardening and especially enjoyed her time with her grandchildren.

She was preceded in death by two sisters, Shelvie Plyler, Loretta "Dolly" Cline and two brothers, John and Delmar Nickels.

Margie is survived by her family, which includes her husband, Charley, whom she married June 16, 1970; her daughter,
Mrs. Deetra "Dee" L. Cox and her husband Richard of Weathersfield Township; her son, Charlie and his wife, Andrea of Niles; three brothers,
Cledith of Austintown, Guy and Clarence "Booney" Nickels, both of Niles; her five grandchildren, Diana and Darla Moore, Charlie, Kallie and Hannah Palmer;
and a great-grandson, Eric Greathouse.

Friends may call from 2 to 5 p.m. Sunday at the funeral home. Burial will be in Kerr Cemetery.
Arrangements and care have been entrusted to the Robert P. McDermott Memorial Home, Niles.